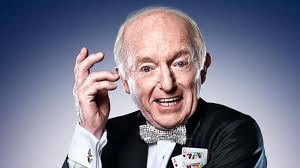 I was very sorry to hear of the death of Paul Daniels just a few days ago. I knew him slightly and admired him greatly. As a cabaret stand up performer he was as sharp as a razor and very funny indeed. And he could do some very good magic. His performing style wasn’t to everyone’s taste but nobody could deny his success. I was always highly amused to see that the TV Times did a survey years ago asking the readers to to vote for the 10 most popular television personalites on British television and also the ten most most unpopular. Paul was on both lists!

I first met Paul when a friend dragged me backstage to see him. I am a bit reluctant to bother celebrities but my friend was more intrepid than me so I embarrasingly tagged along behind him. The doorman (maybe he was the stage manager) opened Paul’s dressing room door saying to Paul, “there are two lads from the Magic Circle here to see you” despite the fact that neither of us was actually a member of the Magic Circle!

The  doorman  continued, “Are they here to find out all your tricks?” Paul surprised me by saying, “Oh no, this fellow has made a career out of one trick!” pointing straight at me. I had no idea that he knew who I was but responded, “Do you know me?” and he responded, “Everyone knows you. You have sold the svengali deck (a trick deck of cards) all over the place” And then he astonished me by listing all the venues I had sold them at all over the United Kingdom. I had no idea how he knew where I had been.

He then regaled us with gossip about not only well known magicians but lesser known names too. Names of amateur magicians that did magic only as a pastime and were members of magic clubs. I was quite taken aback at how he would gossip about people the public had never heard of who were simply ordinary folk who happened to belong to magic clubs.

He was also very rude about well known names in the world of magic but I shall spare their blushes and follow the path of discretion being the best part of valour. I shall merely say that some of them were (and are) celebrities in show business.

I later did some business with him regarding a magic concession I had in the Paul Daniels Museum in Blackpool.

About a year ago I did an interview with the well known mentalist and magician of the mind, Paul Pacific who asked me a lot of questions about Paul Daniels and I expressed my admiration for him. Paul somehow found out about it, viewed it and modestly told the viewers to ignore what I said about him but that the rest of the interview was “pure gold for magicians”

Here is a sample of his work:

OK. Just one last card trick and then I will have to think about something else to write about in the future. This is another easy one.

Secretly note the top card of the deck. Cut the pack into two sections putting the top half with the noted card away from you. So you now have a near heap and a far heap. The far heap contains the secretly noted top card. Let us assume for the sake of this description that the card is the jack of clubs. Pick up the top card from the near heap, look at it and remark, “This card here tells me that this one (indicating the top card of the far heap) is the jack of clubs”

Now repeat the procedure of picking up the top card of the near heap, remembering it and stating that it tells you the name of the top card of the far heap. Of course you simply name the card you looked at and remembered the first time round. Believe it or not this bold procedure will not be noticed by your audience despite the brazenness of it. Show you are correct then replace the near heap on the far heap as you did before. Again you have a new noted top card that you looked at a moment ago.

You are now in a position to go on with this ad infinitum until either you or the audience get fed up with it. You just keep repeating the procedure and keep on naming the top card of the far heap. You can vary things occasionally if you want to by asking the spectator to cut the deck instead of yourself doing so or you can for the sake of variation turn the deck and cut them at a different angle. At any rate you continue with this until you deem it sensible to bring things to a close.

Your grand finale will be to reveal BOTH cards on EACH pile. This is accomplished by a fine piece of bluff. Cut the deck into two packets as usual, the far heap with a known card. Point to the top card of the near heap and miscall it as the known card. Pick it up with the face towards you and do not display it. Remember the name of it then point to the top card of the far heap and miscall this as the one you already have in your hand. Pick it and again do not display it. Place it with the other card so you now have the two cards side by side. Repeat the names of the two cards meanwhile mixing them up from hand to hand so the spectators will have no idea which is which. Finally show the faces to reveal that you have named both correctly. You have just performed a miracle!

OK. I still have no idea what to write about so how about another card trick? Another trick from my unpublished book.

The next piece of magic is based on an old schoolboy trick but with an added variation which makes it twice as effective. It is known as the

When this is done ask the spectator to select a packet. When he does so turn the pile face up so the faces of the cards are visible. Now ask him to mentally select one card and keep it in his mind. Now turn the packet face down. Gather up all three face down piles from the table placing the selected pile in the centre of the three packets.

Deal the cards face down from left to right into three heaps of seven cards each in the same way you did at the beginning. While doing so you chatter amiably asking the spectator if he considers himself to be a good guesser or not. Regardless of the answer ask him which of the three face down piles he thinks contains his selected card.

He makes his selection and you pick up the chosen heap and show him the faces of the cards. Ask if his card is there. If it is then congratulate him on his intuition. If it isn’t then remark that he is perhaps only an average guesser and invite him to try again. If he gets it right this time then congratulate him, if he doesn’t then commiserate and remark that there is only one possibility left and ask him to confirm that his selected card is in the last pile.

Once you have ascertained the correct heap pick up all twenty-one cards from the table just like you did before, placing the packet with the mentally selected card in the middle once again.

Deal them all out face down once more alternately from left to right until you have three packets on the table again. Repeat the process of asking the spectator to guess which pile his card is in. After this extravaganza is completed and the relevant packet identified it will be very easy indeed for the magician to hone in on the spectator’s card since it will be smack in the middle of the packet occupying the fourth position! It works out this way for some odd mathematical reason that is beyond my understanding.

Now of course at this point you could simply reveal the selection out loud and apparently prove you have telepathic powers but I propose a more effective and streamlined procedure.

Continue in this fashion spelling I-S transferring a card to the bottom with each letter you spell. Again discard the top card and lay it aside. You have just spelled the word “is” Continue by now spelling the word “the” thus:-T-H-E again transferring a card underneath with each letter spelled and again finish by discarding the top card. Now repeat the whole procedure with the word “card” as in C-A-R-D and again discard the top card to one side. Now repeat with the words “you” and “took as in -Y-O-U and -T-O-O-K. and at the end of each word lay the top card to one side with the others that have been discarded. You have just spelled the phrase “This is the card you took” When you get to the K in “Took” you will have two cards left. Discard the top one and you will have only one card left. Ask for the name of the selected card. Turn the card in your hand over and there it will be in all its amazing glory!